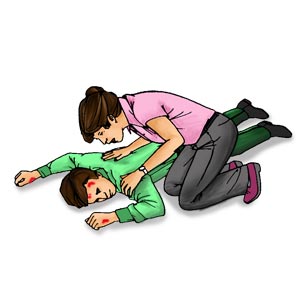 Life of an accident victim can be saved by administering timely medical aid. The 'GOLDEN HOUR', the first hour after the trauma is called the 'golden hour' Instant and proper first aid given to road accident victims during this hour increases the chance of survival manifold and reduce the severity of injuries. Many deaths and impact of injuries can be prevented with First Aid if causalities are treated immediately.

First aid is the initial care given to an injured person. This timely care prior to the arrival of the medical help means the difference between life and death. As it is not always possible that proper medical care reaches the victim within an hour. In that case the passerby, onlookers and other people involved can provide the first aid to serious victims. However, improper handling to victims sometime worsens the situation. Though providing proper first aid to an accident victim is not so complicated but one should be aware of the procedures and precautions.

One of the misconceptions about road accidents death is that most of them happen due to sever injury and loss of blood. But reality is that most common cause of death in road accidents due to loss of oxygen supply. Most of the times it happens because airway gets blocked due to great impact and shock to body. Normally it takes less than four minutes for a blocked airway to cause death.

Priorities of treating an accident victim

Critical four minutes - One of the most common causes of a d accident death is due to loss of oxygen supply. This is mostly caused by a blocked airway.

Restoring breath - mouth to mouth resuscitation. If the victim is still not breathing, give him artificial breathing.